Is the Traditional Lawyers Office Dead?

Is the Traditional Lawyers Office Dead?

< Previous Next >
The customary arrangements in Australian law offices come from rich history and tradition. However, this tradition may not be optimal for the modern legal profession. Lawyers are in a conservative profession that honours the way things have always been done. The rituals are close to a kind of civic religion. Traditionalism and conservative attitudes often embody themselves in the design of law offices.
Category:
Workplace

The Perception of the Lawyer

The truth is that lawyers can be seen as stiff, closed, fraternal, and stuffy. This is true in both Australia and the United States. Polls taken by the Law Society of NSW found that less than 50 percent of Australian people perceive lawyers as giving good value for money. Certain members of the public believe that legal services are overpriced. A Gallup poll taken three years ago in the United States found that generally, people see the legal profession with something less than a friendly view. In the U.S., 74 percent of interviewees believed that lawyers are less interested in justice and serving their clients than in money. More than half believe that lawyers put self-promotion ahead of their clients' best interests, and that we would be better off with fewer lawyers.

Lawyers must recognise that there are perceived social barriers between potential clients and lawyers who may be able to help them. Lawyers are visualised as having high competence but low warmth, which leads to greater misunderstanding of them. But perhaps by changing the physical design of the office Lawyer's can help remove these misunderstandings.

"Law firms," says one critic, "are so steeped in tradition that they've always seemed to us the last frontier of any radical changes in workplace design." The Traditional Offices adopts the wealthy and exclusive as its model. There is an emphasis on dark wood panelling in many offices that recalls a study or library in a mansion. The offices are carefully stratified to emphasise the seniority of staff with access limited along lines of rank. That is not to say that all offices are the same, merely that a lingering trend still remains.

The need to appear prosperous has made the administration of law offices more difficult. Law firms are carrying "way too much space," says design consultant, Jeff Lesk. He calls it, "bloat that winds up costing firms a lot of money." These workplaces are disjointed. Moving into functional office space can reduce expenses by as much as a third on real estate, one-third on lighting, and one-third on natural resources.

The functional work space for a law office is not so different from the functional work space for other professions. But the departure from tradition makes the path to functional offices potentially seem longer. The functional office should rely on flow and communication. They should allow the people in them to see each other and interact. They should break down the hierarchy, or the perception of hierarchy at least. The principles of functional office design for law offices could resemble the designs that other professions are using. Generally, the legal profession has no special requirements: smaller offices for all attorneys and support staff, corner offices turned into meeting rooms, dedicating square footage (saved by slashing office size) to large, bright community spaces. These ideas have become normative for other professions but they have been slow to properly take hold in the legal profession.

Lawyers have been reluctant to accept "evidence-based design," to give up tradition-based design, and to make changes that bring them into line with other professions. The design of law offices can help re-brand a firm. It can be a physical manifestation of forward thinking, open-mindedness and creativity which may be missing from the public perception of the legal profession as it stands.

Implementing an intuitive practice management software like LawMaster that allows you to save on space, is also key. Paperlite solutions such as electronic documents and cabinets allow for you to cut down on storage space and improve on workflows and communication. This allows for areas to be better utilised as collaborative spaces which nurture productivity. LawMaster has helped many clients move from a paper-heavy manual process to a paperlite or paperless environment. Read one client's journey to a paperless office here! For more information, contact us.

Talk to us about how LawMaster can upgrade the performance of your Law Practice. 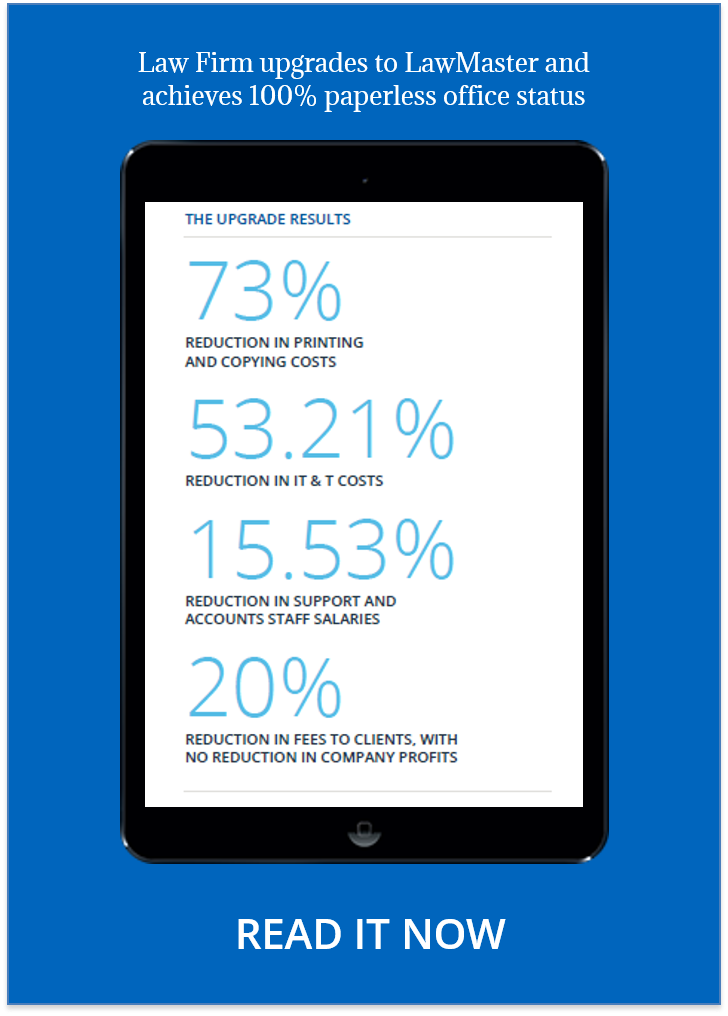